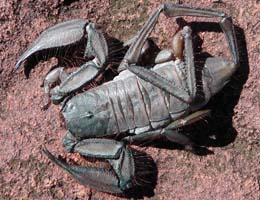 Large pincers and a thick tail indicate that these scorpions are only weakly venomous.

Some scorpions have such weak venom that it is rarely used for defence or to capture prey. This kind of scorpion will often act aggressively to scare away predators and threats. Weakly venomous scorpions are characterized by the following: