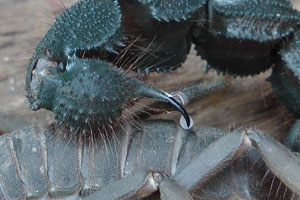 All scorpions have neurotoxic venom that either excites or supresses the nervous system.

Although the media portrays all scorpions as highly venomous animals, this is very far from the truth. Out of more than 130 species of scorpion in southern Africa, only 2 have caused deaths. More people are killed by dogs, run over by cars or die of lung cancer than from scorpion stings.

Venom is created by two venom glands in the scorpion’s sting. Venom is stored in the venom reservoir in the sting until needed. As muscles contract around the venom reservoir, venom is squeezed out through a tiny hole which is situated almost at the end of the sting. In some species, these muscles are so strong that they force the venom out as a spray.

In southern Africa antivenom is easily available. This antivenom is vital in the treatment of serious scorpion stings.